It’s team building time again and the LeadYa family didn’t waste time to make the two-day stay in Nasugbu, Batangas more worthwhile and memorable. The series of activities planned for the whole company made every hour spent with one another even more special.

The day began bright and early as two vans drove the excited bunch from Makati to Batangas. A quick stop at a fast food chain for a company breakfast got the ball rolling, giving everyone the smiles and energy needed for the first activity for the day. First on the list was an outreach activity in a humble daycare center in one of the barangays in the municipality of Nasugbu.

The Growing Up Daycare in Brgy. Tres isn’t exactly the best daycare center you can find, but it serves the purpose of teaching kids the basics of colors, animals, numbers, and moral values. It serves as the second home to a few young boys and girls, that’s why making it as comfortable as possible is one of the primary goals of the outreach.

The LeadYa family arrived at the daycare center, complete with boxes of toys, snacks, and painting materials that will help give the center a makeover appropriate for the kids. Teacher Jenny, along with the excited children, welcomed the team, eager for what was prepared for them.

After a quick talk with Teacher Jenny, the team took on their assigned roles, with one group assigned to give out the toys and snacks and another to prepare the room, tables, and chairs for the repainting makeover.

The boys and girls excitedly lined up to receive their gifts carefully prepared by the LeadYa family and returned to their homes, bringing with them new found joys. Meanwhile, the walls and tables slowly transformed as the LeadYa employees unleashed their creativity and mastery in painting.

After a few hours of sweat and paint stains, the kids will soon have repainted tables and two wall panels of colorful, attractive, and meaningful murals.

Not long after the outreach, the LeadYa family drove to Villa Angelina, where the team would spend the night over for two important events: the team building and the send-off party for the CEO and co-founder, Sir Oron.

A well-deserved rest helped every employee to regain their strength and enthusiasm in time for the team building. Four activities would decide which team between Team CoinPoint and Team Shiny Leaf would take home this year’s top prize.

Everyone’s competitive spirit was alive as Shiny Leaf and CoinPoint members tried to beat the other team by having the most number of cards thrown into the canister, as well as to finish the blindfold maze with the fastest time. Every team member showed no signs of giving up as they unearthed the hidden coins in a flour-filled basket and exerted all their might to emerge as the mightier of the two teams in a tug of war.

The activities tested each team’s strength and willingness to work together. Team CoinPoint gave it their all, but the day brought an unexpected twist. Team Shiny Leaf grabbed the victory that day.

Rocking the night away for Sir Oron

There was another reason for this celebration. It was to wish Sir Oron good luck as he will leave the Philippines and continue operations in Europe. Sir Eilon gave him a heartwarming message and a baseball bat. Inside of it was a poster with the well-wishes of everyone from LeadYa.

It was still a touching time to know that his leaving will indeed happen. It was in 2013 when he and his business partner, Sir Eilon, decided to form a company in the Philippines, bringing along with them their family. From a small office in Makati, LeadYa grew to become a thriving company that has honed great talents over the years. And this became possible with his unending will to always push every LeadYa employee to excellence, staying true to the company’s motto: to the top and beyond.

His presence, knowledge, and humor would be greatly missed in the office, but the awesome music made sure to get the party going.

After dinner, everyone partied hard with the Crafted Noise band. Some team members even jammed with the band, entertaining the crowd with their singing and making the night wilder and more fun. There was a photo booth set up, too. Excited team members and friends had their pictures taken as a memento of an unforgettable evening.

When the party came to a close, the bonding festivities continued with swimming and karaoke. The team made the most of their short stay in the paradise. After an early morning breakfast, it was time to head back to the city, feeling refreshed and armed with fun memories. 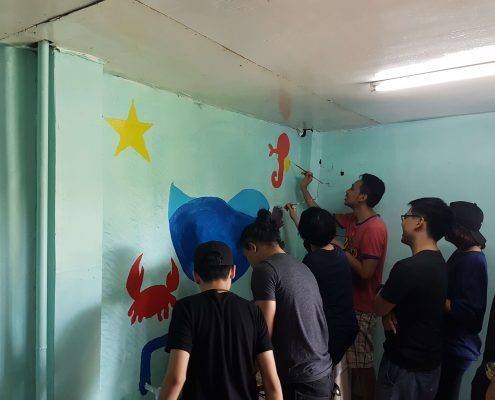 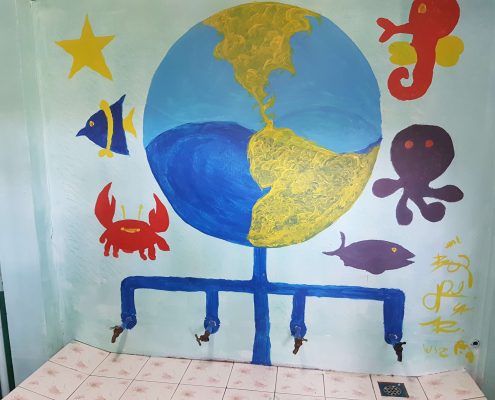 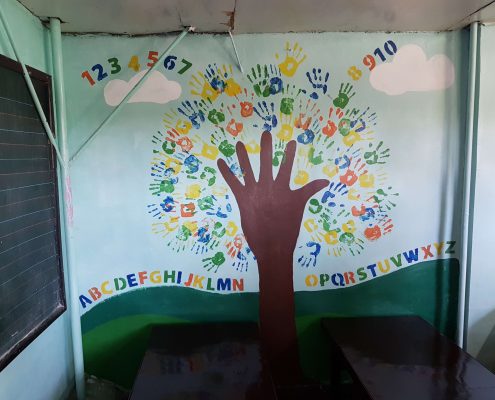 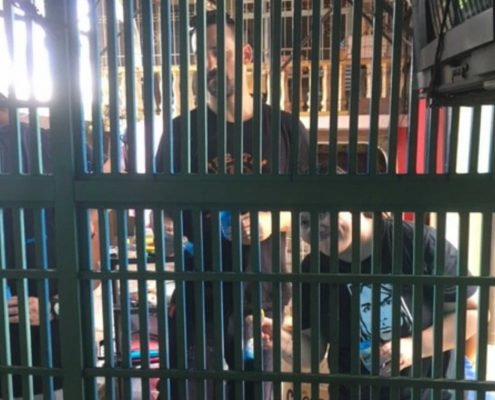 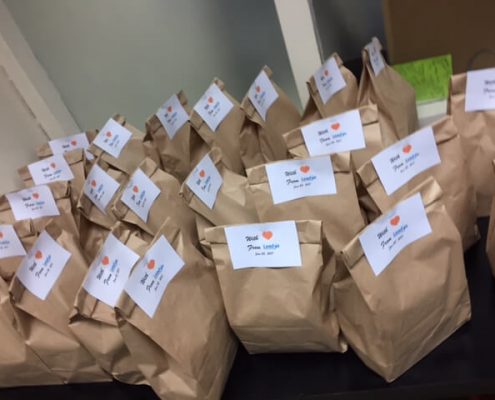 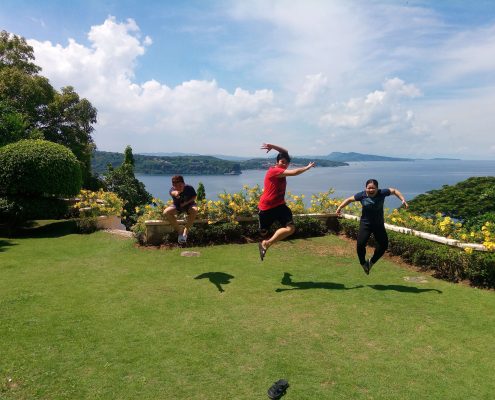 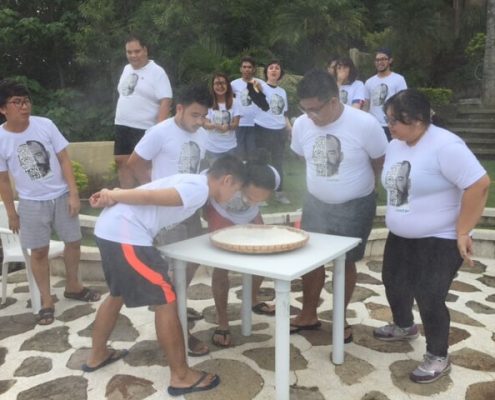 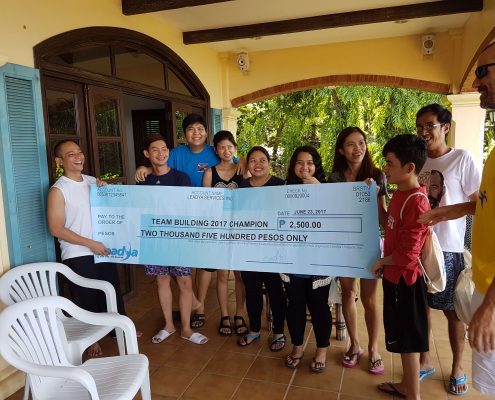 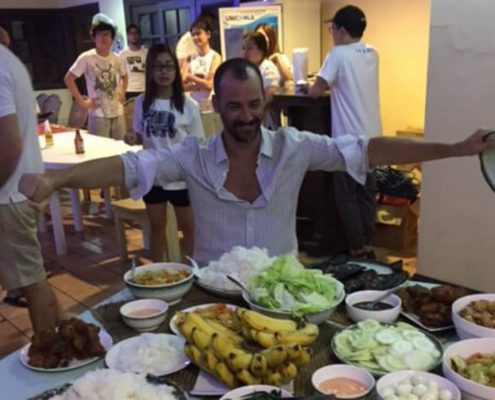 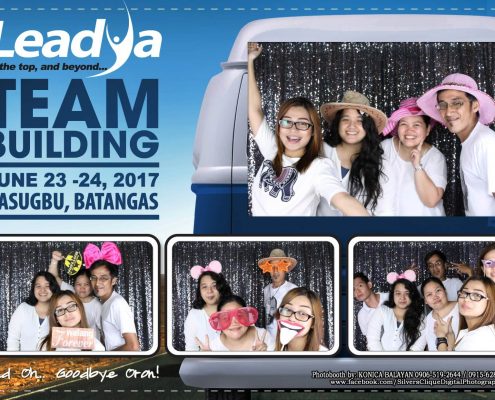 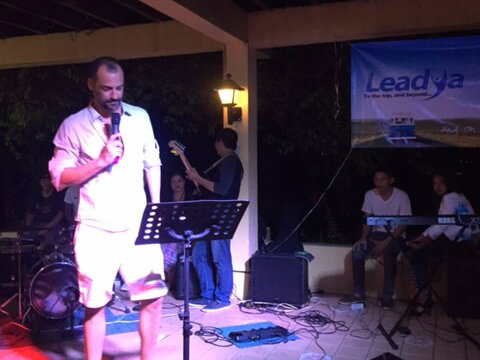 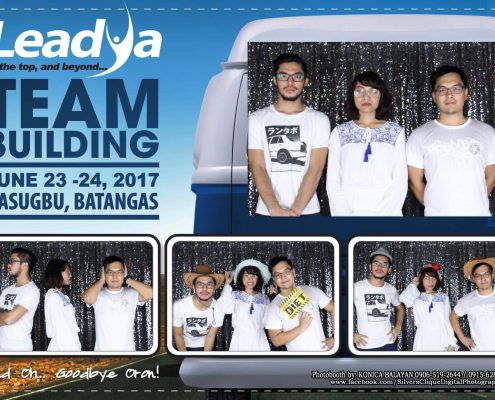